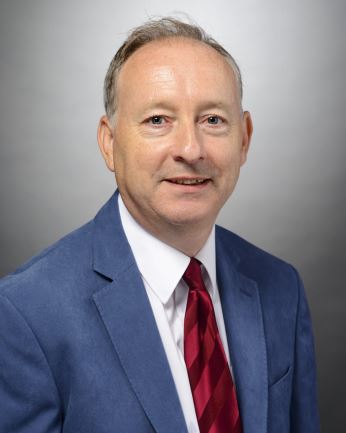 Luminary David Brayden, PhD of the University of Dublin,

Fellow of the UCD Conway Institute

First, let’s disregard this “Luminaries” title, as scientists should not be getting swelled heads! At school, I was fascinated by the gold leaf electroscope experiment, staining for starch in leaves, and when the teacher lit up a magnesium ribbon. At college, pharmacology got my interest when I selected it in second year of my B.Sc., along with chemistry and biochemistry. It won out as my Major as I got interested in how drugs worked on living tissue and then the practical aspects of studying medicines intended for patients, but to do that properly I still had to learn those other subjects. The drug delivery piece came later – I had completed a PhD and post-doctoral period learning about ion transport in cystic fibrosis epithelia around 1991 and realised that this was good grounding to move into the relatively new field of how drug molecules cross epithelial and endothelial barriers. Then I had to go and learn about pharmaceutical formulation in my industrial career.

Most of it is a trudge! In 1990, I realised that the funding days were numbered for traditional epithelial ion transport researchers like me. That was the time I started looking at leveraging skills into a new area. Alza were the top delivery company at that time and they were up the road from Stanford where I was doing a postdoc, so I wrote to them at that time expressing an interest in their transdermal programme and they told me to try Elan back in Dublin. From Mark Prausnitz’s recent interview for this series, I reckon he must have got that job! The 10 years at in Elan were very exciting and intense, but I eventually reached a stage where I wanted to run my own group and felt that I could teach. In academia at University College Dublin (UCD), I believe that my group’s best work has been through collaborations and my favourite paper is the one we did for JCR in 2013 showing an anti-inflammatory effect of a novel nanoparticle in mice in work that involved three different labs, as we had to work out the mechanism in cells, and then got an acute effect in a mouse model following intra-articular delivery.

3. Tell us about the exciting ways in which your field is progressing.

The oral peptide field goes through cycles of optimism and depression; it is in an up-swing at present with many major Pharma having internal programmes and with several molecules in Phase III. A big change is the systematic effort by medicinal chemists in some large Pharma into making potent orally-stable macrocycle-type molecules where perhaps excessive formulation efforts can be avoided. The field of ink-jet printing has endless possibilities as it feeds into dosage form design (tablets, buccal films), precision medicine, and the production of three-dimensional tissue cultures. Every bioengineer now seems to be producing something new with an ink-jet printer, so this means that inter-disciplinary research will ramp up and this is an opportunity for rapid innovation. One of the great long-standing challenges is to surmount the blood-brain barrier and there has been great progress in understanding its regulation and in use of improved screening models. In addition, CRISPR-cas-9 gene editing appears to have taken over the mantle from siRNA and its delivery problem will surely quickly benefit from all the effort having been put in to deliver the latter. Finally, a more balanced view is emerging on the capacity for nanomedicine to truly deliver in the areas of diagnostics and therapeutics against a background of excessive promise. It is still a relatively young field and needs more research in scale-up processes, large animal models, and exploration in a wider range of diseases than cancer.

I had great mentors in two of the great cystic fibrosis researchers, Professor Alan Cuthbert (RIP) at Cambridge and Jeff Wine at Stanford. They were focussed on detail of experimental design, were craftsmen in writing papers, and aspired to the highest levels of research integrity. The idea of putting research in the public domain that you could not stand over would be an anathema to them! They believed in quality publications over quantity and would not necessarily be overly impressed with high h-indices per se. They were stubborn too and preferred to work in a research area less trodden by others. The worst advice I ever got was when I was interviewing for UCD in 2001 and an (unnamed) UCD academic whispered in my ear “be careful what you wish for!”

Not one thing! I have been blessed with luck and good timing. First, I moved from academia to the pharmaceutical industry in 1991 as the drug delivery field was taking off. The ten years I spent at Elan Drug Delivery were amazing, as Elan did fantastic ground-breaking research and required its young staff to manage its joint venture projects with US Start-Up Biotechs, which proved to be exceptional training. Then, in 2001, I moved to academia just before Elan hit problems and I was lucky enough to land my first grant in my first year at UCD. I was then able to build my group at key staging points with Science Foundation Ireland Investigator, Cluster, and Centre grants, along with participation in EU consortia. I am at the stage now where I am working with industry as part of collaborative grants and through consulting and I probably enjoy the industry interactions now more than when I was employed in it. Aspects of my career progress seemed to create clear opportunities for the next phase, but none of it was planned.

The path for a research scientist has fundamentally changed and has become ultra-competitive. To get a rung on the academic ladder is very tough now and it is a challenge to keep all the key aspects afloat – grants, papers, managing research teams, committee work, academic society work, and teaching. I encourage my graduating PhDs to leave the country and experience research in international labs and not necessarily to make a choice for academia or industry until they have had that post-doctoral experience.

Long hikes in the beautiful Wicklow mountains near Dublin on Sundays; reading fiction, playing the violin, and following the fortunes of our wonderful Irish and Leinster rugby teams.