Drug Delivery Australia (DDA) 2015, “Recent Advances in Drug Delivery Technology” was the 9th annual meeting of the CRS Australian Local Chapter, held on November 19 and 20 at St. Leo’s College, University of Queensland in Brisbane. The meeting comprised invited and contributed talks and posters from a range of fields of delivery research, including pulmonary delivery, anticancer drug delivery, gene and siRNA delivery, and polymer-based delivery platforms, from both academic and industry speakers. The conference provided a platform for showcasing a variety of research toward improving drug delivery across Australia and New

Zealand. This year we hosted 99 visitors from the United Kingdom, Malaysia, India, New Zealand, and all over Australia.

DDA 2015 had an emphasis on advanced delivery systems, and this was evident from the two plenary speakers. Yvonne Perrie (Aston University, United Kingdom)—an editor of the CRS Newsletter who was recently a director-at-large for CRS and is a past chair for the United Kingdom–Ireland CRS Local Chapter—gave an insightful plenary talk. On the second day, Mohd Cairul Iqbal Mohd Amin (Universiti Kebangsaan, Malaysia) gave an interesting overview on smart hydrogels for oral delivery of protein-based drugs. Through this meeting, we aimed to form stronger ties with the CRS Malaysian Local Chapter, where Cairul is the president. 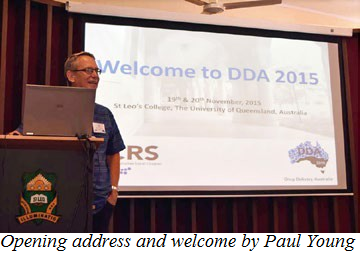 The conference commenced with an opening address from Paul Young, head of the School of Chemistry and Molecular Biosciences at the University of Queensland, followed by our first plenary speaker, Yvonne Perrie, giving her presentation entitled “Liposomal Adjuvants—Harnessing Drug Delivery to Improve Vaccine Efficacy.” There were four talks presented in the following session on oral delivery. Timothy Barnes (University of South Australia) described his research on multi-compartmental oral vaccine delivery systems. Continuing the oral delivery theme, Shasha Rao (Ian Wark Research Institute) presented a polymer and silica-lipid hybrid for improving oral delivery of poorly water-soluble drugs. A stimuli responsive nanoparticle for oral delivery was described by Clive Prestidge (University of South Australia), while Amirali Popat (University of Queensland) ended the session with an interesting talk on stimuli responsive nanoparticles for oral delivery. 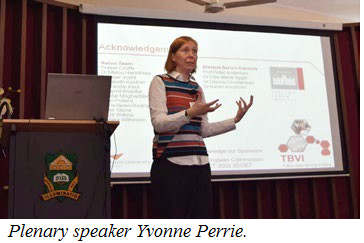 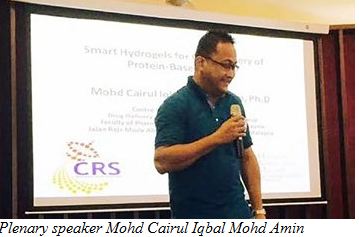 The second day of the DDA 2015 conference started with a thought-provoking plenary talk from Mohd Cairul Iqbal Mohd Amin. Cairul gave an overview of smart hydrogels for oral delivery of protein-based drugs. This session was followed by the highly anticipated Rapid Fire Talks (three minutes each) by eight Ph.D. students, preselected the day before from their posters. The students did an excellent job keeping to time, and the presentations were all short, 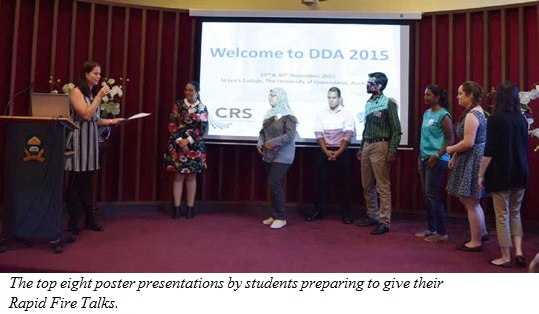 entertaining, and a real pleasure to listen to. The winners of the two $1,000 cash contributions to attend the next CRS conference in Seattle, WA, U.S.A., in 2016 were Khairul Azfar Kamaruzamam (University of Queensland) and Nicole Bisset (Monash Institute of Pharmaceutical Sciences). The $200 eBook voucher was awarded to Sharan Bobbala (Otago University, New Zealand). The session on oligonucleotide and polymer delivery started with an exciting talk from Michael Monteiro (University of Queensland) on polymers in biomedical applications. The session continued with Peter Moyle (University of Queensland) talking about optimising delivery systems for the transport of oligonucleotides and Markus Mullner (University of Sydney) on the design of cylindrical polymer brushes. Paul Young (University of Sydney) gave an interesting talk on the complex delivery of particles to the lung. Lastly, in this session, Kara Vine (University of Wollongong) gave an insightful presentation on degradable polymeric fibres for the treatment of pancreatic cancers. 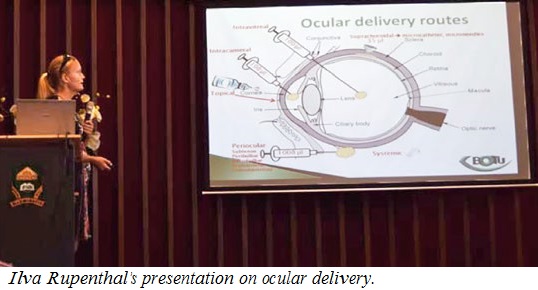 Following lunch, the session on recent advances in drug delivery started with Ilva Rupenthal (University of Auckland, New Zealand), who gave a motivating talk on stimuli-responsive implants for drug delivery to the posterior segment of the eye. Her talk was followed by Ian Tucker (Otago University, New Zealand) with his work on the challenges in oil-based delivery systems for veterinary applications. We also learned a lot about how “oils aren’t oils” with respect to the motor sport industry! Nhung Dang (University of Queensland) gave an insightful talk on treating skin diseases using microparticle technology, and Nam-Trung Nguyen (Griffith University) followed the theme with his talk on liquid marbles and three-dimensional cell culture. Lastly, Makrina Totsika (Queensland University of Technology) informed us about novel anti-microbial approaches for multi-drug resistant pathogens.

The last session of the conference focused on targeted delivery systems. Nazrul Islam (University of Technology) started with a talk on the controlled release of drugs from polymeric nanoparticles. Arlene McDowell (Otago University, New Zealand) followed with insight into the nano-bio interface to optimise a drug dose. Last but not least, Michael Crichton (University of Queensland) concluded the DDA 2015 conference with a talk on delivering solid vaccine formulations to epithelial tissues using micro-projection arrays. 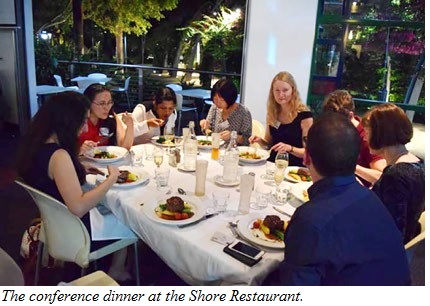 The conference dinner, sponsored by Davies Collison Cave, was held at the Shore Restaurant, Southbank, in the heart of Brisbane, where an excellent meal was had along with spectacular views of Brisbane.

The meeting was strongly supported by our sponsors: the University of Queensland School of Chemistry and Molecular Biosciences, CRS, ThermoFisher Scientific, TrendBio, Sigma-Aldrich, CNS, Davies Collison Cave, the Woolcock Institute of Medical Research, Monash Institute of Pharmaceutical Sciences, and Interpath Services. We extend our thanks for their generous and continued support.

This highly informative and efficient two-day meeting was a great success, with a number of collaborations arising from discussions and networking, as well as great exposure for the students involved. The quality of the meeting was again testament to the growing significance of drug delivery research across Australia.
Plans for the next meeting in Sydney in October/November of 2016 are already underway. n