The prognosis for patients diagnosed with pancreatic ductal adenocarcinoma (PDAC) remains dismal, with a global 5 year survival of 9%.[1] Currently, the only potential curative therapy for this disease is surgical resection of the tumor in conjunction with systemic chemotherapy. Around 80% of diagnosed cases however are deemed unresectable due to tumor involvement with the celiac artery and superior mesenteric artery.[2] Because of the lack of early stage symptoms and typical late stage diagnosis, these patients are commonly administered palliative chemotherapy, with the gold standard being a combination of nab-paclitaxel (nab-Ptx) and gemcitabine (Gem).[3, 4] Gem has been the first line treatment for unresectable and locally advanced pancreatic tumors for the past 20 years, however combination chemotherapy is now proven to achieve greater efficacy than a single drug alone.[3] Gem and nab-Ptx have been shown to have greater efficacy in metastatic PDAC when compared to gemcitabine monotherapy. A long term study follow up after 13.9 months showed that there was a significant increase in overall survival in patients treated with gem + nab-Ptx compared to gem alone (8.7 months vs 6.6 months).[5] Although statistically significant, a survival increase of 2.1 months is modest, and new ways to treat this disease are urgently required.

We have addressed this issue by developing a drug delivery device that is designed to be implanted intratumorally, using a minimally invasive endoscope ultrasound-guided fine needle injection (EUS-FNI) procedure. The majority of drug reformulation and delivery studies to date have largely focused on the delivery of a single therapeutic agent. As PDAC responds to combinational chemotherapy [3], we have developed a structure that is capable of simultaneously releasing Gem and Ptx that act synergistically to improve anticancer activity towards PDAC cells.

The wet spinning method was employed using a custom coaxial spinneret to form long lengths of a coaxial fiber, consisting of a poly-Ɛ-caprolactone (PCL) shell, (± Ptx), and an alginate core, (± Gem) (Fig 1A). This was then cut to 0.5cm lengths, and encased in a 3D printed capsule. For ultrasound experiments, the coaxial fiber was gold sputtered and visualised under ultrasound (Fig 1B, C)

Multimodality therapy combining chemotherapy and radiotherapy is a standard treatment approach, however radiation therapy is often limited by the surrounding tissue tolerance. Administration of Gem and Ptx prior to administration of radiation has been shown to sensitise PDAC cells to radiation.[6] A clonogenic cell survival assay was performed to assess the ability of Gem and Ptx (free or fiber eluted) to exhibit a radiosensitising effect on PDAC cells in vitro. This involved pre-treating Mia-PaCa-2 human PDAC cells with reduced drug (to avoid mass cell death) for 24 h, then exposing them to 1 Gy radiation and plating them out into petri dishes. Cell colonies were stained after 10 days and counted.

It was observed that cells treated with empty fibres (containing no drug) without any radiation administered had no effect on the colony formation ability compared to the untreated controls (Fig 2A). However, when the empty fibers were combined with radiation, a significant decrease in colony formation was observed. This suggests that while the fibers are not cytotoxic, they may be having a radiosensitising effect. Similar effects from other marine based products have also been reported and therefore warrants further investigation.[7, 8] Overall, the dual Gem and Ptx loaded implant had the greatest combinatorial cytotoxic effect on the cells (Fig 2D) compared to Gem/Ptx alone (Fig 2B, C).

All mice tolerated the subcutaneous implantation procedure with no animals experiencing any adverse side effects from the empty or Gem+Ptx implant (such as inflammation, irritation, swelling or infection). The implant did not migrate or move at any point throughout the study, and all treatments were well tolerated with no reduction in animal weight over the 31-day study period in any treatment group. There was a significant difference in tumor volume at day 31 for animals treated with the Gem+Ptx implant when compared to mice receiving saline only. This anti-tumor response was 1.5-fold greater than mice receiving the empty implant + Gem+Ptx (i.t.), and 2.3-fold greater than mice receiving empty implant + Gem+Ptx (i.v.) (Figure 3A). All animals were imaged using the IVIS SpectrumCT for tumor visualization (Figure 3B). 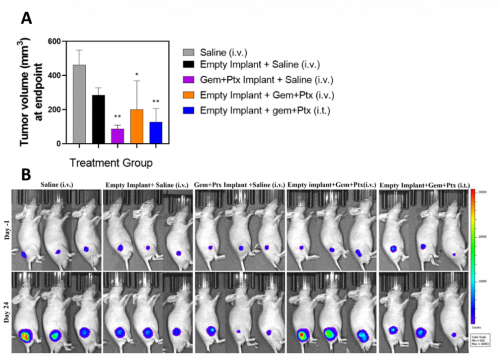 This study describes the fabrication, biophysical characterization and in vitro and in vivo preclinical evaluation of coaxial Gem+Ptx implants to improve drug delivery to PDAC tumors. Data from this study demonstrates that drug-loaded implantable delivery systems have potential application in the neoadjuvant setting as radiosensitizers for multimodality therapy where radiotherapy is required but combination treatment is not always tolerated due to the toxic side effects of systemic chemotherapy. In vivo studies showed the Gem+Ptx dual drug-loaded implants reduced tumor volume compared to control treated mice and were well tolerated with no adverse side effects observed. Altogether, the data presented here has provided the foundation for further development towards an effective therapeutic treatment option for PDAC patients in the future.

This work was conducted with funding from the Illawarra Cancer Carers and the PanCare Foundation (APP1165978, administered by Cancer Australia) awarded to KLV.