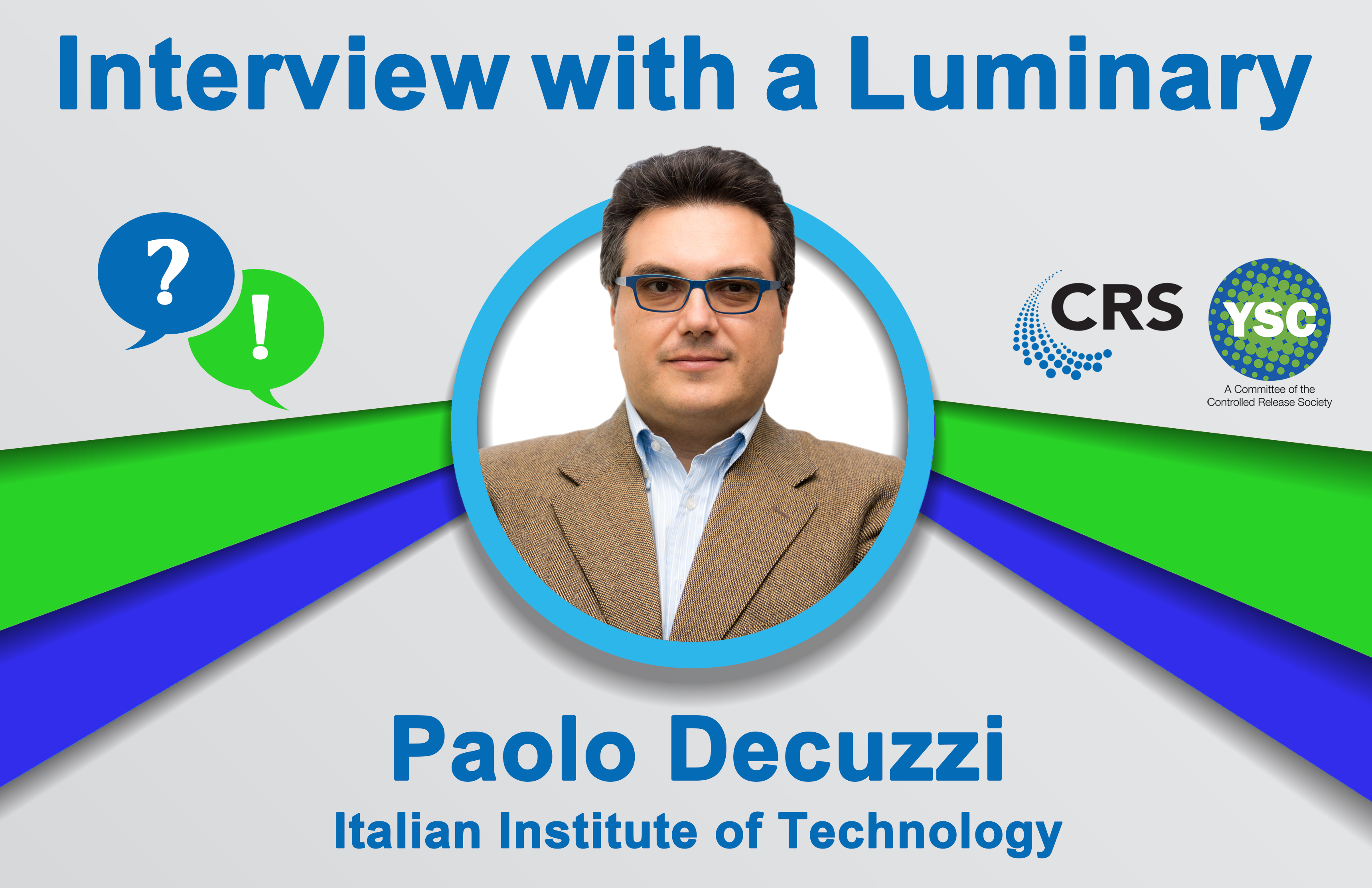 Paolo Decuzzi is a Senior Scientist and Professor of Bioengineering at the Italian Institute of Technology in Genoa. He earned his PhD in Mechanical Engineering in 2001 from the University of Naples – Federico II, Italy. In 2004, as an Associate Professor of Machine Design, he co-founded the Laboratory of BioNanotechnology and Engineering for Medicine – one of the first nanomedicine laboratories built in a School of Medicine – at the University of “Magna Graecia”, Italy. In 2007, he moved to the University of Texas Health Science Center Houston and, in 2010, to the Methodist Hospital in Houston, where he served as the Interim Chair of the Translational Imaging Department. In July 2015, he moved to the Italian Institute of Technology in Genova, Italy, where he established the Laboratory of Nanotechnology for Precision Medicine. His research group works on the rational design of nanoconstructs and implantable devices for combination therapies and multi-modal imaging at the interface among engineering, computational and biomedical sciences.

As a mechanical engineer, I developed a passion to design and build machines. The freshman dreams of becoming a Formula 1 Chief Engineer progressively evolved as I familiarized myself with the rigorous beauty of Thermodynamics, Solid and Fluid Mechanics. In 1997, I started my PhD programme to study friction and adhesion at the nanoscale. Those were also the years when the Nanotechnology initiative was launched in the US and the word Nanomedicine made its first appearance on the scene… BTW, those were also the years when Altavista and Yahoo allowed one to search the world wide web, read books and articles from libraries all over the world and rapidly exchange information and ideas with colleagues on different sides of the globe. My interest in science is derived from the natural quest for knowledge and understanding. My interest in drug delivery lies in the fact that it is the most interdisciplinary, ‘democratic’, and open research field that I have been exposed to with the additional bonus that, if things work well, you can have a broad impact on patients and society.

My early years at the Polytechnical University of Bari, my hometown, were a bit bumpy. I clearly wanted to do something different, and I was given the opportunity to spend time as a visiting scientist in different Institutions – the University of Michigan and the Princeton Materials Institute – where I continued working on friction and adhesion between 2000 and 2003; and the Ohio State University, where I started melting together the engineering expertise and biomedical sciences, with the help of Mauro Ferrari. But the first turning point in my career occurred in 2004, when I moved from a School of Engineering to a School of Medicine. I joined as an Associate Professor the smallest and youngest Italian University – the University of Magna Graecia – where a visionary Rector launched a nanotechnology research initiative in a School of Medicine. The daily interaction with biomedical scientists, clinical scientists and medical doctors fostered the integration of Engineering concepts with Medicine and Biology. This process was further catalysed when I moved to the Texas Medical Center of Houston in 2007. This was the second turning point in my career! Then, after spending almost 10 years in the possibly largest US medical center, I moved back to Europe and Italy with the generous support of a European Research Council Grant. In 2015, I established the Laboratory of Nanotechnology for Precision Medicine at the Italian Institute of Technology, at that time, the youngest research institution in Italy. This was certainly the third turning point in my career, when I decided to move back to a technology-oriented institution. And I am looking forward to meeting the fourth turning point in my career!

Follow your passions without being afraid to leave your comfort zone – geographically and scientifically! At times, this will make you a stranger and we know that ‘people are strange when you're a stranger’, but being a scientist means exploring new oceans and continents and learning to be a stranger.

3. Tell us about the exciting ways in which your particular field is progressing.

After years of hyperboles, Nanomedicine is now entering a new phase – a consolidation phase. The next decade will witness a continuous growth of Nanomedicine as a science, bringing together Chemistry, Physics, Engineering and Medicine in a more coherent and accurate manner and as a tool to generate new clinical products. The Covid-19 pandemic, despite its tragic impact on our society, will pave the way to new clinical applications of nanomedicine and drug delivery – from nano to micro and macro. As scientists, we should focus more on nano-pharmaceutical technologies to facilitate the industrial-scale realization of our bench-products; develop modular drug delivery systems for patient-specific combination therapies; and truly exploit the advantage of theranostics in patient stratification.

In my career, I have been blessed by working with many special people. Both in Italy and the US. I have received advice and support from multiple people. Most importantly, I have adsorbed, tailored, and integrated any advice into my credo. Therefore, it is not possible to distil out the best piece of advice and who gave it to me. This is not a diplomatic answer – it is exactly what it is: great mentors teach through their daily actions!

But let me share with you this one though: it is easy to bless the great people that have supported your career in different ways. But it is also important to recognize those people that have not, who have opposed your ideas and ‘unconventional’ decisions, because if it wasn’t for them, I would not have been here talking to you as a YSC Luminary!

No. It has been a complex journey with multiple challenges and turning points. But I have learned so much and I met so many incredible people that I would not change anything. Sometimes, I think that perhaps it could have been easier and faster if I would have started out as a Pharmaceutical Scientist rather than a Mechanical Engineer. That could have saved me easily 5 or more years. But that is my fingerprint and I would not change it. And my Mechanical Engineering experience is coming back again … you’ll see!

Being a scientist is not an easy path. Scientists are superheroes.

Well, consider this: you are required to perform experiments on the bench or on your workstation; write papers, grants, patents and scientific reports; read papers and books; apply for financial support to different governmental agencies; seek private funding from companies; teach undergraduate and graduate classes; mentor students; build a research group and properly oil the interactions among the group members; serve as a psychologist, at times; be part of multiple scientific networks and actively engage with scientific societies and other stakeholders… and if you have a family with children then… And your thoughts and ideas follow you everywhere: in bed, under the shower, while cooking, drinking a glass of red, or listening to some crazy be-bopper playing the piano or blowing a trumpet.

Scientists are superheroes and the only piece of advice is “join the Scientist League only and only if you like it so much that you cannot picture yourself doing anything else. Being a scientist is a mission, it ain’t no day job!”

Hanging out with family and friends; working on science and math projects with my two boys (for a few more years as they are growing fast…); walking and by walking observing, comparing, learning more about new places that I am visiting and their culture and ways of leaving; building puzzles, generally up to 2,000 pieces; playing RISK; and listening to music, mostly jazz and be-bop, but I like all kinds of music from the Doors to Beethoven, from Ice T to Pavarotti.