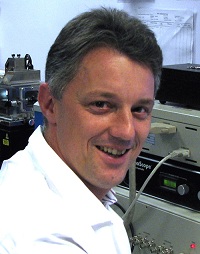 Thank you for agreeing to speak with us about your latest paper published in the Journal of Controlled Release. It’s a great piece of work that got a lot of interest when recommended on the CRS LinkedIn group. You’ve used inkjet printing to produce a range of formulations in which ratios of drug (felodipine) and excipients (PVP) were varied, and the resulting microdots’ physicochemical properties were characterised by a range of nanoanalytical techniques.

A         The idea came from a roundtable discussion with colleagues from AstraZeneca as part of a brainstorming session around the concept of “Pharmaceuticals in 2050.” We wanted to identify novel manufacturing methods that would be capable of producing individualised medicines tailored to a patient’s needs and, if possible, something simple enough that it could be done at the point of care or even at home. Inkjet printing as a ubiquitous technology seemed to fit the bill, as it had already shown potential in other areas such as printed electronics and bespoke 3D printing of objects.

Q         How do you see it being applied in the future? What would a product look like?

A         Whilst we have made progress in demonstrating the principle of producing a functional formulation using this approach, it is of course a long way from practical application. Our vision, though, would be that the “formulation printer” of the future would have the ability to print 3D formulation from various drug and excipients cartridges supplied by the pharmaceutical industry to achieve the dosage regime suited to an individual patient. The printer would be linked via the internet to the appropriate healthcare provider, so individualised dosages could be printed, monitored, and modified remotely. One might imagine, as personal diagnostic sensors improve, that these could also be integrated into the system, providing feedback as to the effectiveness of the medications and again modifying dosages as needed. As our use of distributed computing becomes ever more embedded, we can imagine a kind of cloud-enabled circle of monitoring and formulation manufacture.

Q         The speed at which it is possible to produce these microdots is impressive (<1 msec), but you also found this had a significant effect on the resulting products: when spray times were increased to 1 min, the drug crystallised. Why do you think this was?

A         This becomes a classic case of understanding the kinetics of drying and the interactions of the various components in the drop. In our case, this was primarily controlled by the choice of solvent and polymer sprayed with the drug. With the printer we used, there were also certain limitations to the types of materials that could be used, primarily related to the upper limit of viscosity of the solution that was possible to print. Printing multiple drops onto the same point, as would happen over the longer time scale, also raises issues of cycles of drying and resolvation. These are important issues that are faced in different ways by many manufacturing processes used in pharmaceuticals, and I am sure all issues can be addressed, at least for a significant number of drugs.

Q         Might changes to the formulation modify this? Presumably this could be investigated in high throughput using this technique?

A         Yes, indeed, the final form of the printed deposits is closely related to the formulation components and their interactions with each other. The great advantage of using such a flexible platform as an inkjet printer is the ability to study many variables rapidly, as deposits can be produced in arrays with each spot produced in a slightly different way. This, of course, does bring immense analytical and data-handling challenges to be able to study all these spots, but we are in a fortunate position to have developed these strategies through other strands of the research in our lab (see the work of Morgan Alexander in Biomaterials).

A         We believe this may be related to the rapid drying of the spots leading to the polymer (PVP) and the drug (felodipine) being trapped as an intimate mixture more efficiently than has occurred in previous studies, in which bulk methods of mixing such as spin-casting have been used. Hence, a high fraction of the drug can be incorporated into the polymer. This remains a topic for further study to see how general a phenomenon this is.

Q         It was interesting to see that even though the microdots remained amorphous, dissolution was slowed at higher drug loadings. Was it still faster than pure API? What would you say the maximum useful drug loading is?

A         This is an area where we are not clear on the reason for the observed result. We have noted from our confocal Raman studies that, for the felodipine–PVP system, PVP is removed relatively rapidly from the microdots compared with the felodipine. Hence, in this case, the ratio of polymer to drug is changing, and this effect is magnified at high drug loadings.

Q         What advice would you give to scientists starting out their careers in the controlled release field?

A         A good starting point, I think, as you enter any new field is to spend as much time as possible at the beginning trying to understand what are the key problems that can be addressed using the “toolbox” of ideas and methods that the field has to offer. As well as reading widely, speak to as many people from different backgrounds as you can (academics, industrial, clinical, regulatory, etc.) as you formulate you own views of the field and the difference you can make. From this base, your innovations will have the best chance of generating interest and, of course, support.

Q         Is there a classic paper or a recently published paper you think is interesting and would recommend to the CRS membership?

A         As someone who works in the nano area, there is a breathtaking pace of developments across many fields at present. Over recent years, I have really been taken by the work exploiting DNA as a “smart” building material. Many papers have now demonstrated “programmable” assembly of complex structures (cages, cogs, etc.) in solutions, some of which have the ability to respond to external stimuli. What are applications in controlled release? Well, perhaps this is not clear at this stage, but it is exciting to speculate. There are many good papers in this area. A recent short review that highlights the possibilities in drug delivery is “Challenges and Opportunities for Structural DNA Nanotechnology” by Pinheiro et al.