Christopher Nelson completed his undergraduate studies at the University of Arkansas, U.S.A., in 2009 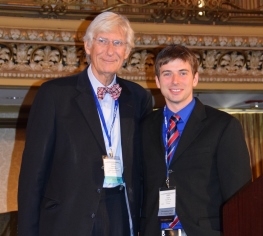 and began doctoral studies in biomedical engineering at Vanderbilt University. Under the direction of Prof. Craig Duvall, his work focused on controlled delivery strategies for nucleic acids, proteins, and small-molecule drugs. Most notably, his thesis work involved creating a platform for the controlled delivery of small interfering RNA to improve tissue regeneration. After obtaining his Ph.D., Christopher joined the laboratory of Prof. Charles Gersbach at Duke University to develop technologies for genome engineering.

Alexander (Sandy) Florence, CBE, was dean of the School of Pharmacy, University of London, from 1989 to 2006, having been from 1975 a professor of pharmaceutics at the University of Strathclyde. He graduated with a B.Sc. (pharmacy) with first class honors from the University of Glasgow in 1962, a Ph.D. in 1965, and a D.Sc. (Strathclyde) in 1984. In 1990 he founded with Gregory Gregoriadis the Centre for Drug Delivery Research in London.

He was a member of the U.K. Committee on Safety of Medicines for many years until 1999, and he chaired its Chemistry, Pharmacy and Standards committee. His research interests in surfactant systems, colloids, dendrimer and nanoparticle uptake, drug targeting, and nanotechnology are described in more than 300 papers. Textbooks include Surfactant Systems: Their Chemistry, Pharmacy and Biology (1988, with David Attwood) and five editions of Physicochemical Principles of Pharmacy (Pharmaceutical Press, also with David Attwood), with the fifth edition appearing in 2011. An Introduction to Clinical Pharmaceutics was published in 2010. He was founding coeditor with Vincent Lee of the Journal of Drug Targeting and is editor-in-chief of the International Journal of Pharmaceutics. A past president of the Controlled Release Society, he is a fellow of the Royal Pharmaceutical Society, the Royal Society of Chemistry, and the Royal Society of Edinburgh. He holds honorary doctorates from Hoshi University, Tokyo, and the Universities of Copenhagen, East Anglia, London, and Strathclyde.

The CRS Foundation thanks individual and corporate donors for making the postdoctoral fellowship program possible.